Ankara’s ongoing military crackdown on Kurds has sparked yet another fierce brawl between the ruling AKP and the pro-Kurdish HDP opposition MPs. In the meantime the streets of Istanbul witnessed violent clashes between police and youths sympathetic to the PKK.

Deputies threw punches, pushed and tried to restrain each other in the assembly on Thursday in a row over military operations targeting Kurdish militants in Turkey’s largely Kurdish southeast.

Initially the session of the Constitutional Committee of the Turkish Parliament convened to discuss the controversial proposal by the ruling Justice and Development Party about the possibility of removing immunity from deputies, which could potentially translate into mass prosecution of pro-Kurdish Peoples’ Democratic Party (HDP) parliamentarians. HDP deputies have been under the eye of Turkish President Recep Tayyip Erdogan for having links to the outlawed Kurdistan Workers’ Party (PKK).

RT’s petition on Change.org: We urge UNHRC to investigate alleged mass killing of Kurds in Turkey

After the start of the discussions, those opposing the ruling party’s proposal to strip immunity began arguing with the proponents of new motion against such a move. Instead the HDP, which denies direct links with the PKK, called on the government, to stop fighting against the Kurds in the southeast and resume peace efforts.

Anger over the ongoing Kurdish crackdown has spilled over onto the streets in Istanbul’s famous Giza district, where members from the Patriotic Revolutionary Youth Movement (YDGH), a youth group sympathetic with the PKK, clashed with police. 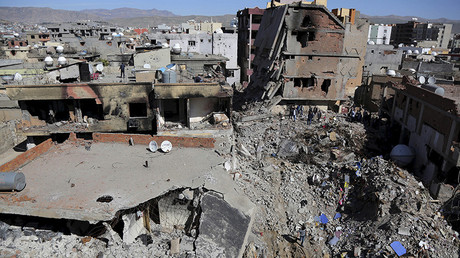 ‚Mass killings‘ of Kurds in Cizre reported to UN

The parliamentary debate on the controversial constitutional amendment was delayed until next week, following Thursday’s violent culmination – as well as an earlier brawl, which also paralyzed the parliament. On Wednesday an HDP member accused the government of “massacres” against Kurds. In reply the ruling MPs were heard shouting, “terrorist, terrorist!”

Turkish security forces have been conducting a massive crackdown on predominantly Kurdish areas in the country’s southeast since the mid-2015, imposing indefinite curfews in many Kurdish districts and waging battles against PKK fighters, who are considered terrorists by Ankara.

All this time the Turkish government is preventing foreign journalists or inspectors from assessing the situation on the ground. Heavy artillery has been deployed against a predominantly civilian population. The violence has also spilled over into neighboring Syria with sporadic cross-border shellings.

HDP and Pro-Kurdish activists have accused Turkish forces of numerous violations of human rights, including extrajudicial killings of civilians, torture and other crimes. According to the International Crisis Group, 1,262 people, including at least 250 civilians, were killed in Turkey between July and April 2016.

Fearing that the civilian death toll could be much higher, last month RT launched a petition under the hashtag #JusticeForKurds, calling for a UN Human Rights Council-led investigation into claims of the alleged massacres of Kurdish civilians.